The Main Problem with the iPad? Publishers 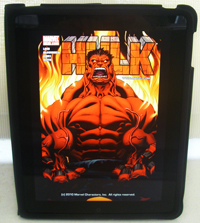 There’s been much crowing by traditional publishers about how the iPad will save books and magazines. But the content we’ve seen so far won’t save anything because it fails to re-imagine books and magazines for iPad-like devices.
The rare exceptions prove the rule. Marvel Entertainment has re-invented and reinvigorated the comic book for iPad.  (It may not be coincidental, of course, that Disney owns Marvel and Steve Jobs is Disney’s biggest individual shareholder thanks to the Pixar deal. But this doesn’t makes Marvel-for-iPad any less cool.) Atomic Antelope has provided a stunningly engaging version of Alice in Wonderland by using the accelerometer (the internal gadget that senses up and down) to enhance the story. But this scattering of exciting content just makes the majority of what’s out there look even more painfully mundane and old-fashioned.

Technology, of course, can’t save publishing unless publishing gets on board and saves itself. The industry, however, has not been up to the task. Their heads are so far up their old approaches that they can’t (yet) see a way out.

The only really fabulous thing about the iPad and the future it portends is that it continues to push the democratization of publishing. Tablet computers (iPad now, Google’s Android tablet next and many more devices down the road) represent a full-color, full-motion platform on which multi-media content can be readily, easily and inexpensively published. (One of Apple’s e-tail partners for iBooks is Lulu.com, the self-publishing site.) So it will be up to real people with unique visions to shape the future of books and magazines on devices like the iPad.

None of this helps existing publishers one bit and, in a repeat of TV’s history, the books and magazines available for iPad are lagging the technology by a mile. Until content catches up, the iPad and its tablet cousins will be consigned to wasting innovation by serving up content so insufficiently re-imagined as to bore the pants off everyone. At the moment, most of it just makes readers yearn for paper.

I’m purposely ignoring the widely annotated tech glitches and shortfalls of the iPad itself. The device, in its own right, is a huge disappointment to many.

But the technical failings pale in the face of traditional publishers’ failure to transform their content. It’s as if the publishers were waiting for Apple (or Adobe or some other hip tech outfit) to tell them what to do. Since Apple didn’t do that, publishing is still lost.

For most iPad reading, the content has been put on a screen instead of a piece of paper with no real appreciation for the difference. This is certainly true of GQ magazine’s iPad edition, which has no notion of how to integrate text and images. It appears to be true of the not-yet-released-but-much-hyped Wired magazine for iPad, which looks in available demos like it suffers the same problems.

You begin to understand what real game-changing approaches might look like when you see what Disney’s Marvel Entertainment has done to genuinely change the comic book game on an iPad. It’s far cooler than paper. As Josh Fisher, a creative director and designer in Portland, ME, recently tweeted to me, “Marvel is apparently doing such a great job, people are buying iPads just to subscribe to their comics digitally.” There is vigorous chatter on various blogs to back that up.

Marvel’s iPad app has two viewing modes. Full-page mode looks a lot like a comic book, except the colors are more vivid and luminous. But tap twice and the mode switches to frame-by-frame, using built-in zooms, pans and dissolves that take the reader through the story panel by panel at the touch of a finger. In panel-by-panel mode, you are effectively immersed in an animated slide show where the experience of reading has been transformed. The iPad version makes the art work better and the story more alive. It really is fabulous.

Then there’s “Alice for iPad,” a re-imagining of Lewis Carrol’s wonderful tale. In this beautifully designed and illustrated “Alice,” 3-D looking objects from the story (a bottle labeled “Drink Me,” for example) roll and fall around the page realistically as if pulled by gravity as the reader shifts the iPad’s orientation. It’s all put together in ways that uniquely enhance the fantasy experience of reading the book.

On the other end of the spectrum are disasters too numerous to mention, like the iPad version of the classic 1994 kids book Miss Spider’s Tea Party by David Kirk. The original book, published by Scholastic, featured Kirk’s gorgeous, oversized, richly colored illustrations, each one filling a page with the words opposite. It endeared Kirk instantly to parents and kids and led to millions of sales.

On the iPad, in “read” mode, the pictures are stuck above the words and a five-button navigation bar further clutters the screen and never goes away. The pictures are too small and you can’t enlarge them. Tapping them sets off predictable animations: bees flapping wings and buzzing, Miss Spider slurping tea and speaking, etc. All the while, irritating piano music plays. Miss Spider’s Tea Party was produced by Calloway Arts and Entertainment, a multi-media company that has a partnership with David Kirk.

Friends with cooler heads and warmer hearts tell me to relax. It’s just a matter of time, they say, before the content fits with the technology. After all, early TV was radio with boring visuals. We’ve been here before.

But this isn’t 1948 and traditional publishers should know better. The web has been around for 15 years. Some content creators have used that decade and a half to learn how text, animation, video and other elements can be integrated on a small screen. Evidently, the publishing industry didn’t paying much attention until the hour grew late and their entire business became threatened.

Like a lot of content creators, my agency, Story Worldwide, is working on new ways to use these devices. Frederik Andersen, our group creative director, says, “As with any other new platform, what I am most excited about are the things we haven’t seen or imagined yet.” So far, Andersen says, most of what the publishers are showing looks “like a PDF document with a bit of video and nice transitions, which has been around for years.”

Andersen is “still looking for those ideas that no one has had yet — the ideas that will turn this device into an innovation.”