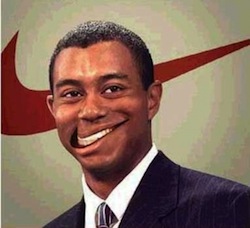 It’s the chicken vs. the egg of the ad industry: Does the brand help the ad or does the ad help the brand? What really makes a campaign memorable?  Is it overall concept, humor or catchy jingles? What about celebrities? Following a February 23 study by Starch Advertising Research, it is estimated that magazine ads become 15% more memorable if they involve a celebrity.

In fact, 61% of readers recalled the use of celebrities in ads while 53% recalled ads without any famous faces. This could have a positive impact on resolving the frequent disconnect between brands and consumers; ads today are all too often just lost in the white noise of impatiently fast-forwarded commercials and the half-heartedly flipped pages of waiting room magazines. What are some ways celebrity advertising could be created so that it keeps consumers willingly engaged?

Well, what has worked in the past? The classic “sex sells” will probably never die. Combine an abundance of bare skin with a drool-worthy celeb and you’ll have a memorable ad, no problem. But will it actually create success for the product? Take actress Megan Fox for example: her short film for Armani has over three million hits on YouTube, but that doesn’t necessarily mean it will instill a desire for extremely expensive denim. Then there are those that appear to be relying on the sex factor but end up becoming almost boring; the message is lost among their weird and dramatic attempts at promotion. (See Lady Gaga’s TV spot for Mac cosmetics.) According to the Starch study, CoverGirl understands the difference between sex appeal and true beauty – and they’re reaching consumers. Ellen DeGeneres became the new face of the cosmetic line in 2009: “Her CoverGirl & Olay print ad in the March 2010 issue of House Beautiful generated a phenomenal 91% readership score, the highest scoring entertainment celebrity ad in the Starch analysis.” Even her commercials are fresh and lightly humorous. CoverGirl’s secret is their use of famous females who appear approachable, who can connect with viewers, and whose star power doesn’t overpower. How can that be taken to the next level?

Most people are skilled multi-taskers. Even more people, however, are multi-media-taskers, which creates an even higher wall for advertisers to have to breach. During any commercial break, viewers can be playing games on their digital devices, texting, tweeting, Facebooking, reading, etc. Some people probably even set their DVRs and wait to start watching for the sole purpose of avoiding commercials. There are so many outlets in this digital age, it’s nearly impossible to reach consumers unless you attack them all at once. How do you get someone to stop and focus on one single outlet in order to receive a message in its entirety? How can it be done effectively with the use of celebrities?

Advertisers also run the risk of overkill—viewer-heavy events like the Superbowl and the Academy Awards are known to rely heavily on celebrity placement commercials. Superbowl commercials in particular are practically legendary for being hilarious, yet most of this years’ flopped. An important thing to keep in mind is that the Superbowl is an excuse for many people to get together, eat, drink, laugh, talk, and yell at their televisions. In the midst of all that, how is a 30-second commercial going to manage to command enough attention for someone to notice, love it, rewind, and make everyone else notice? Would the inclusion of a celebrity even matter?

The examples/possibilities are endless and the debate is limitless; in the Post Advertising age, we wonder if advertisers will ever get it right. But by the same token, isn’t it kind of fun to examine why they sometimes don’t? Each paragraph above posed a question – take a moment to see if you can answer them. Brainstorm and share your ideas below!