Last fall my favorite TV show was American Horror Story. I enjoyed all the twists and turns, but more than that, I loved getting together online with friends and perfect strangers every Wednesday night to see how each episode would unfold and talk about predictions for the rest of the series.

More and more, people are turning to their laptops and mobile devices as a way to virtually gather ’round the TV set and share an entertainment experience. But for brands deciding where to invest their engagement efforts, there are a multitude of options to consider.

GetGlue and Viggle attach incentives and personalized entertainment schedules, while AMC’s Story Sync follows the program’s story with you, even if you’re not watching live. Each one presents a unique set of offerings, but what they all have in common is that they create a community in which audiences can talk about what they’re watching, share opinions or predictions, and get access to behind the scenes or exclusive content. But there still might be no better place to chew the fat about your favorite shows than Twitter.

The Elephant in the Room

From social revolutions to McDonald’s horror stories, hashtags provide a way for audiences on Twitter to curate conversations around their favorite (or most hated, in the case of McDonald’s) topics, thinning the fire hose that is a Twitter feed down to a manageable stream (which is relative, depending on the hashtag). Nearly all networks are using them to lead the conversation (such as Arrested Development’s #BluthParty). 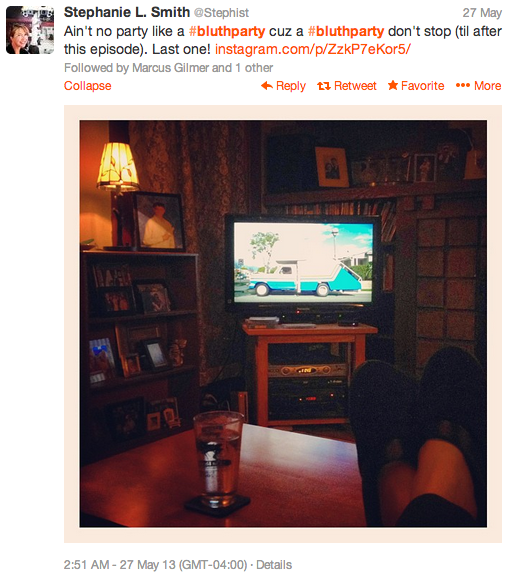 Just last week, 15 hours after the premiere of the new season of Big Brother, #BB15 was still trending and engaging conversation. Bluefin labs (the leader in social TV analytics) reported that about 95% of real-time TV engagement happens on Twitter.

Twitter has recognized its potential power within this space and is actively making moves to create an even more engaging experience that will allow a two-way exchange of content and media between entertainment brands and their audiences. One of the ways they’re doing this is through Twitter cards.

Twitter cards make it possible to attach media experiences to links. This allows brands to share news stories with a full summary and photo, and to tweet sized photos, photo collections, apps, media and products. Going a step further, Twitter’s Amplify program enables its partners to embed videos directly into their own stream. The NFL and NBA have already used the program to tweet instant replays and real-time highlights. Other partners including BBC America, Fox and Clear Channel Media have signed on as well.

Twitter has also teamed up with Nielsen to create a new metric called the Nielsen Twitter TV Rating, which measures social media activity of a TV show’s audience, and it acquired Bluefin Labs to lead the way in social TV analytics as well.

What This Means for Brands

Twitter gives entertainment brands the power to guide the conversation (though never control it). Its new features coupled with its social TV analytics make Twitter the primary place for entertainment brands to engage with audiences. However, it’s not the only place, and brands will need to actively monitor and engage with fans that use second-screen and social TV apps.

Do you use a second screen while watching TV? If so, which technology do you use? How do you use it? Let us know in the Comments section.