Not So Gaga For Product Placement 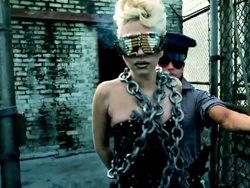 While we’ve seen some brilliantly executed, forward-thinking work this year, a few strategies remain stuck in the ol’ days of advertising. Product placement—usually seen as a very inauthentic tactic—still haunts much of today’s media. Do brands really think it accomplishes much more than ten minutes in the public spotlight? Puh-lease.
Take two high-profile examples: a recent music video from Lady Gaga and a film called The Road.

Her highness’ nine-minute vid for “Telephone” overlays a mediocre Tarantino-esque plot with a number of shameless brand sponsors. Namely Miracle Whip, Virgin Mobile, and dating site Plenty of Fish (??), which all make brief but overt cameos. What’s going on here? Maybe you can connect the dots, because frankly, I’m at a loss:

(View the explicit version at your own risk.)

Apple even joined the party, practically commandeering an episode of Modern Family as it geared up for the iPad’s launch.

Think you can pull a fast one on us? Get real: we won’t pick up your drink because Viggo took a swig, and we’re not looking for love online because we saw it in a video. Paid endorsements are painfully obvious and your audience won’t take the bait. In fact, they might just be turned off completely. Examples like these illustrate the exact wrong approach to associating a brand with a piece of content. Instead, brands should be producing their own content––devoid of interruptions, representative of their audience and actually worthy of remembrance.

Seen any other examples of lazy marketing lately? Send ‘em our way in the comments below—or tweet to us at @postadvertising!