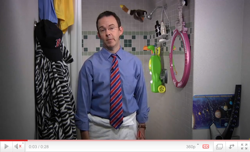 Lordy, this is a rough one. Like an embarrassing mother misusing the latest hip catch phrase, tech giant Cisco and their note-for-note Old Spice imitation (…minus the laughs and wit, that is) could’ve been a meme-killer — if anyone had bothered to pay attention to it.

The “CiscoSPice” videos (…it’s an abbreviation), featuring “Ted from Accounting” replying to various tweets in the exact same format and fashion as Isaiah Mustafa, clocked in at 2,750 views across 18 videos for the day. By comparison, Old Spice’s racked up 40 million on day one. So how come this effort bombed while the other succeeded?

Megan O’Neill goes into great detail about the dismal reproductions on Social Times (read it here), but after watching a single response, it’s painfully obvious as to why the uploads didn’t garner any sort of attention — they’re unequivocally unoriginal, sloppily written and poorly executed. Have a look (if you dare):

Emulation doesn’t work nearly as well as it may have it the past. Folks are less privy to, and far more critical of advertisers now than perhaps ever before (see our collective skepticism over KFC’s recent terrible, humanity-degrading viral). Nothing turns people off like fakes and copycats.

If anything the videos illustrate the need for a more serious investment in content. That means dedicated, top-notch editorial and creative resources that will yield their own Old Spice-level virals. But if you’re really not going to take the effort to create something new, it’d better be clever and entertaining. It better build off and improve upon the original.

So, now that you’re one of the lucky few that have viewed Cisco’s rip-off viral effort, let’s hear what you’ve got to say about it! We promise not to post a dead-pan video response.