Is Twitter a Gold Mine for Character-Based Brand Storytelling?

This post originally appeared in our December '12 issue of “Live Report from the Future of Marketing,” our monthly Post-Advertising newsletter. Subscribe for free here.

My wife has never seen the movie Goonies, released in 1985. That’s a shame. So many classic lines, and one of the most well known yet practically silent characters, Lotney Fratelli, better known to the masses as Sloth.

The strong, silent type, Sloth had only three audible lines, but anyone who has seen the movie can recite his most famous one, “Sloth love Chunk!”

For the more than two decades since the movie’s release, the only words Sloth muttered were those in his three lines. That is, until he joined Twitter. Any brand participating in social media (and we’ve reached the point where it is nearly every brand) faces the daunting task of creating and cultivating a community on a near-daily basis. With this constant requirement comes the need for a community manager to consistently provide unique and timely content that entertains, informs, and engages.

And there’s a reason the term “Community Manager” exists instead of “Facebook Page Writer.” Social media provides a place where communities of people with common interests can congregate, and its up to the Community Manager to keep those groups alive and flourishing. For a week, it’s no problem. After a month, you’re still doing fine. But what happens after a year? Two years? How can community managers keep their fans engaged over the long haul?

Posted by Luke Dringoli, 06 Apr 2011
Oh gentle, ad-obsessed readers, it seems like only yesterday Mad Men was on the air and we at Post Advertising were serving up weekly slabs of inspired ad industry analysis to go with it. Where do the days go? It’s been nearly 6 months! The show isn't back, but there is a bit of news: following belabored negotiations with AMC, it was announced that Don Draper & Co. won’t be back in action until 2012. Who’s responsible for the hold up and what made the protracted, closed-door contract talks so ironic? Read on!
Share

A Brief Lesson in the Evolution of Marketing

Posted by Andrea Fjeld, 09 Mar 2011
Mad Men may have glamorized the old-school way of doing things, but advertising has changed drastically since the ’60s. This snappy short covers the evolution of marking — from the olden days to the modern era…shall we call it the post-advertising age? Watch after the jump!
Share 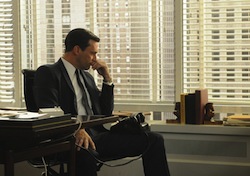 Posted by Luke Dringoli, 19 Oct 2010
(Warning: spoilers from the season finale of Mad Men, as well as excessive vitriolic ranting below.) And, like that, it's over. Was this really what we were waiting all season for? There's a unanimous feeling around our office: Sunday night's season finale of Mad Men was, without a doubt, the worst episode ever produced. But, like an accident on the side of the road, we couldn't look away. What the heck happened?
Share Buried Treasure: Canadian Club Digs Up One of the Best Post-Ad Campaigns Ever

Posted by Charles Coxe, 04 Oct 2010
Whether you think of it as over-the-hill swill, or the perfect late-night rendezvous for a half-can of ginger ale, pretty much everyone would agree that Canadian Club’s shot of cultural relevance heard its last call years ago. Luckily, the brand is now breathing new life into one of the coolest ongoing Post-Advertising campaigns ever devised: the Hide a Case campaign.
Share

Posted by Luke Dringoli, 28 Sep 2010
We're up to episode ten in this season of Mad Men, and the name of the game right now more than ever is...secrets. Don's secret is threatening all that he's built — agency and otherwise. Of course there's the threat to his freedom (he could go to prison), but on some level this is a potential crisis for his personal "brand," if you will. And where there's crisis, there must be damage control.
Share Posted by Luke Dringoli, 14 Sep 2010
It took half a season to pick up, but Mad Men is certainly on to something in these last few episodes. Sure, Sunday night was light on the actual advertising process, but all the HR/office dramatics more than made up for it (and touched on an altogether different side of agency life). Also, there was a voice over! A voice over is a sure-fire narrative technique! Or, wait, maybe a voice over is just a slapdash emergency, the equivalent of Vodka and Mountain Dew?
Share

Posted by Luke Dringoli, 08 Sep 2010
Okay, great Mad Men episode, or greatest Mad Men episode? In either case, "The Suitecase," was all about the advertising. More specifically, it was about idea generation, and all the blood, sweat, tears, and in this case, vomit, that this torturous process involves. So who wants to spend their 27th birthday with their boss, cranking away at concepts about luggage? Oh! Me! Me!
Share Working for the Weekend: Peggy Gets Naked in a Hotel Room (Season 4, Episode 6 of Mad Men)

Posted by Luke Dringoli, 31 Aug 2010
As Matthew Weiner and co. hauled home more Emmys on Sunday night (Mad Men scored its 3rd straight win for Best Drama), AMC forged ahead with another new episode of their mega-hit show in which, ironically, Don won his own award (a pretty ballsy move on Weiner's part to air this episode on Emmy night, but that's just how he rolls!). This week was all about past and present ambitions and power grabs at SCDP and the episode continued the trend of the company's creatively-minded folk cutting through the clutter of formalities and inner-office practices. And yes: Peggy got naked.
Share