The Hero’s Journey is a model story format—honed by the knowledge contained in myriad cultures and history—which follows remarkably consistent rules that reflect profound human needs. It explains the narrative structure found in the great myths, timeless fairy tales and modern action films. Here’s how Cinderella’s story maps directly onto the Hero’s Journey: 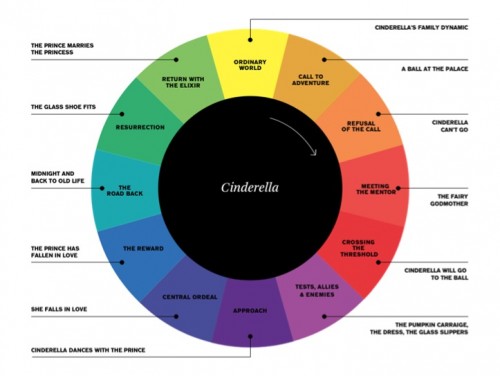 And, surprisingly, Fight Club can be mapped to exactly the same pattern (spoiler alert!!): 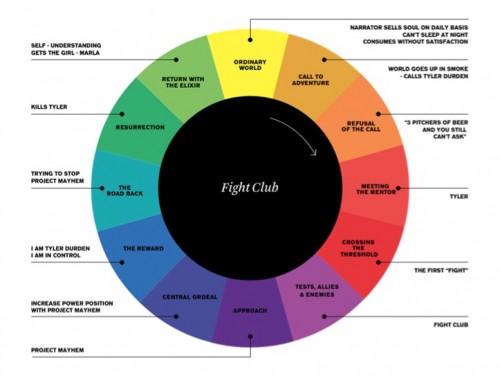 So what does this mean for brands?

Brands are stories, effectively. At their most successful, these stories powerfully narrate the relationship between the brands and their audience(s). The most powerful brand stories, like the most engaging fairy tales, speak to fulfilling deep, unmet emotional desires.

Humans are psychologically hardwired to respond to meta-narratives that have been informed by human culture and history: the long journey home, marrying outside your tribe, the quest…It’s a search for meaning that defines what we are and want to be.

Through digital and social media, using maturing social-listening and search techniques, we can uncover and understand meta-conversations across cultures in a way that was not possible even five years ago. Tapping into these conversations reveals the current mind-sets of different audience segments and reveals their deeper unsatisfied emotional needs, providing a rich seam of consumer insight that brands can use to learn the best way to position and promote their stories to create value for themselves as well as their consumers.

Once marketers understand which aspect of the brand consumers really identify and engage with, the next step is to plan and shape the conversation between brand and audience over time. This content plan’s sole purpose is to bring the brand’s story to life across every touchpoint between consumer and brand, in the real and digital worlds.

In the Social Media Week session, we shared some of our latest thinking on the social multiplier effect (Kirk Cheyfitz will be publishing more on this topic soon)—which is the process of using digital to leverage a brand’s fans so they make the brand story genuinely contagious, delivering exponential return for the brand and lowering media spend dramatically.

According to Nielsen, recommendations are roughly twice as trusted as advertising. Add to this Forrester Research’s recent studies of how social fans share brand stories through their networks, and you’ll see the beginnings of the compound multiplier effect. But greater trust and greater reach are totally dependent on how interesting, credible, useful and, most of all, contagious the content is as well as where it’s shared and promoted.

The Role of Traditional Advertising

This is not to say that we should dismiss years of established traditional advertising knowledge and practice. Traditional advertising still has a role to play, as has been proven by one or two stunningly effective long-term brand campaigns—Sainsbury’s ‘Try Something New Today’ being a perfect case in point. A few years ago, Sainsbury’s deployed a simple but rich ‘big idea’ to impressive effect across its brand ecosystem, extending it across everything from integrated comms to internal staff engagement. The campaign makes an eloquent case for the age-old marketing practice of delving deep into a brand to uncover an idea so broad and powerful that people, consumers and staff, can’t help but listen and act.

But brand work like this, despite London’s prominent place in the global advertising industry, is the exception rather than the rule. It is noteworthy precisely because it is rare and because it depends heavily on constant support by large amounts of paid media.

So think how valuable, for both brand and consumers, a rich and satisfying brand story can be, and how powerful its impact can be as it is spread across the media ecosystem by brand advocates who share with their far-flung social networks using the latest developments in social and mobile. Such contagious brand stories spread on their own as a matter of routine, gaining currency by tapping into ongoing conversations and multiplying across social networks at extremely low cost. That is the present and, increasingly, the future of the new advertising. And that is a story every brand will find well worth telling.

So what’s your story?